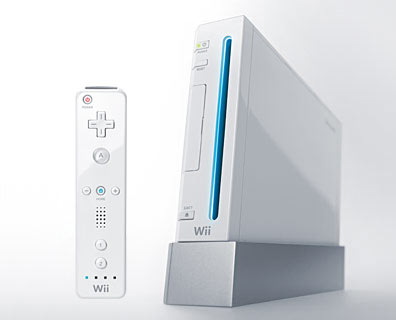 We bought a Wii.

I read a report the other day that said the average child spends 4 hours a day watching television and another 2 hours playing video games. The alarms went off in my head. Like that beeping when they test the Emergency Broadcast System. Only this time, it was an Actual Emergency. My kids are below average!

This will not do. They just need to apply themselves a bit more. I know we can get those numbers up. And if they work hard at it, maybe one day they can even be, dare I say it, ABOVE average.

So Julie and I decided to take action. We got them the Wii to go along with the Playstation from last year. Good start. Now we’re considering adding a third television to the home, perhaps in the younger daughter’s bedroom. It will be a sacrifice but we love them that much.

We’ve locked up the bikes, taken away all books and destroyed any toys that don’t require batteries. (Stuffed animals smell funny when they burn.)

But if that’s still not enough, we’re going to look into getting an Xbox and maybe even a TV on the kitchen table so we can watch while eating. Valuable time is being lost at dinner time discussing events of the day and school work. Time that would be better spent on Hannah Montana for sure.

Speaking of school, that’s one of the major obstacles to our plan. We do our best at home but they spend so much time in school that it doesn’t leave enough hours in the day for TV and gaming. But there may be a solution on this front as well. A portable gaming device or two (PSP and/or GameBoy and/or DS) should allow them to catch up during breaks at school. And if they’re careful, maybe they could even sneak in a few games during certain classes. Nobody really uses math or science after graduating anyway.

And as for TV, if we pick up a couple of iPhones, they can catch up on favorite shows while they’re at school. And it will give them a chance to bring up those low texting numbers too. It’s the best of both worlds.

But there’s another obstacle to the master plan. There aren’t really enough kid shows out there to fill all the time necessary to get our numbers up. So it looks like we’ll have to introduce some other shows little by little until they are up to speed. South Park is a cartoon so that should be a good start. The Sopranos is a possibility too. I’ve heard it’s a good family drama.

Oops. Gotta go. Just found out they’re supposed to be getting in 2 hours a day of web surfing in addition to the TV and video games. We may have to pull them out of school. But that’s the price you pay. Parenting is hard work.

Alt. Titles for this Blog

"The Butler Was Framed"
Better for a photoblog.

"Holding Forth with a Fifth"
I'd have to start drinking more.

"Bri Curious"
Cute but too much explaining to do.

"Shenanigans"
I just love that word.

"Sound and Fury"
A little obvious. Ended up using a derivative.