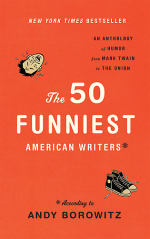 I’m reading The 50 Funniest American Writers. It’s an anthology by Andy Borowitz. Good stuff. When I finished the George Carlin section, I turned the page and, BAM! The next story caused a memory to come flooding back. A connection to a little story I tell. A brush with greatness.

I occasionally have these strange little star crossings. Meeting someone famous, usually while they’re in the middle of being a normal person. Odd and exciting for me. Annoying for my friends because the actual stories are usually pretty lame, but I still tell them over and over.

“Did I ever tell you guys about the time I played basketball with Emmit Smith? I did? Did I tell you about the time I ran teleprompter for Danny Glover? Really? I did? Well how about the time I bumped into Dave Grohl buying sunglasses?” Eyes roll. “Yes. Yes Brian, we’ve heard the story.” I need to find new friends or new stories. Anyway, this is kind of one of those.

The next story in the Borowitz book, the story that caused the BAM memory, is Laws Concerning Food and Drink; Household Principles; Lamentations of the Father. Seriously. That’s the title. My first exposure to Lamentations of the Father was in 1998 while driving home. It was read aloud on This American Life. I love This American Life. I love Ira Glass. I loved this story. But I missed the intro and that fact resulted in my next long distance brush with greatness.

I wanted to know who wrote the story and what it was called so I decided to look it up. But where? The internet of 1998 was not the internet of today. Today, This American Life episodes can be streamed or downloaded and episode summeries are available on the site. (After you finish this drivel, go there and listen to some truly outstanding storytelling.) But in 1998, I didn’t have the website option. So I called WUWF, my local public broadcasting station, and asked if they had the info. They did not. But they were kind enough to look up and give me the This American Life number in Chicago. So I called.

Maybe you’ve jumped ahead of me but that’s ok. I called expecting a secretary or intern to answer and I would ask my question and move on. But when I called, I heard these words; “This American Life, Ira speaking.” Or “This is Ira” or something like that. The exact words are a blur. But there’s no mistaking that voice. Ira Glass was on the other end on the line. I froze for a moment. (That, unfortunately,  is a common aspect of my star meeting stories.) I finally stammered through my question, describing the story and explaining that I missed part of it and wondered what it was called and who wrote it. He of course knew right away and gave me the info. (Ian Frazier wrote Lamentations of the Father. Still love it. I’ll post it below.) I thanked him. He said you’re welcome and that was the end of it. Lasted all of a couple of minutes. But I’ve lost count of how times I have said or written “Did I ever tell you about the time I talked to Ira Glass?”

For the first 10 years or so, it didn’t come up very often. There was the occasional opportunity at a party or at work where the show would be mentioned and I would pipe up. But it was rare. Then, Facebook happened. People “liked” things. And when any of my friends “liked” This American Life, I took advantage of the opening by commenting. “Yes I like that show too. Did I ever tell you about the time I talked to Ira Glass? No? Well, the year was 1998…”

I guess there are benefits to social media. Mainly being, now I don’t have to see the eye rolling or hear the sighs. 🙂

(This is the version I heard on This American Life in 1998.)

Alt. Titles for this Blog

"The Butler Was Framed"
Better for a photoblog.

"Holding Forth with a Fifth"
I'd have to start drinking more.

"Bri Curious"
Cute but too much explaining to do.

"Shenanigans"
I just love that word.

"Sound and Fury"
A little obvious. Ended up using a derivative.